On Trips Day, Year 10 spent the day exploring the world of Astronomy. From the Royal Observatory to the National Maritime Museum, they went on a fascinating journey through the stars before building star scopes of their own ✨ https://t.co/GzqAJv2hYb https://t.co/aY16ruV3SU

Spaces are available in our Sixth Form for September 2022, including bursary places. Find out more and apply now: https://t.co/WYMnFkv3yc https://t.co/gxCPvQvd9X

On 9 May, our music students performed in the annual Pop Fest concert, held at Up The Creek comedy club. It was a fantastic night of exceptional musical talent, with group and solo performances from students in all years. Huge well done everyone involved! https://t.co/1E8D84r9QE https://t.co/NaYTfgvp1B

Not only do our girls succeed academically - they also complete a myriad of other achievements that make each one shine. ISI rated the quality our pupils' achievements as "excellent" 🌟 Read the report here: https://t.co/R9DXcqshGp https://t.co/PwPaD18Uab

We are recruiting for a Senior Alumnae, Development & Marketing Events Manager. This is a great opportunity for a creative marketing professional to use their skills to play a key role in the delivery of our alumnae relations strategy. Apply here by 8 June https://t.co/MUfG9gFztn https://t.co/ls8vun1lOh

On the last day of the Spring Term, the much-loved House Debate made a long-awaited return! All of our teacher-student teams made some exceptional arguments, but the Paragon team of Mr Sodhi and Jess McLaughlin came out victorious 🏆 https://t.co/KcLXIDV82E https://t.co/wvHgefT4La

We are delighted to invite all alumnae to a Summer Garden Party this Thursday, 26th May. Join us for cocktails, street food and to share memories with your old school friends and teachers. We look forward to welcoming you back to school! RSVP here: https://t.co/ixaFeWCJqy https://t.co/aBrHTM8O9x

On 11th May, our new Head Student Team attended the TSB 'Women of the Future' event, where they heard from an impressive range of female role models. Thanks to @pinkylilani CBE DL, Founder and Chair of the Women of the Future Programme! https://t.co/2z1U9SguKh

Here at Blackheath High, our girls and their personal development are very important to us. We're so pleased that our recent ISI report rated us "excellent" on this category - it means we are succeeding in our mission! Read our report highlights here: https://t.co/A2LDfuvPI3 https://t.co/E7K4gwxu6z

A rare opportunity at Blackheath High Junior School in September 2022 - recently rated ‘excellent in all areas’ by the ISI, this is an exciting time to join our exceptional Junior School. We’re currently accepting applications for Years 3 & 4 - apply today https://t.co/tnuZU5PbIN https://t.co/s85EqGYasE

After the lovely weather this week, we couldn't end it in any other way… an Eco Club update! Mrs Bijnen's stick insects have grown even bigger, and the caterpillars are all in their own chrysalis, soon to emerge as beautiful butterflies. We can't wait! https://t.co/6K8aRebkan

Huge congratulations to the Junior School Art department for the spectacular art show last week! The theme was Celebration, and a celebration indeed it was, showcasing our girls' incredible talent and creativity. https://t.co/4ZlvY97J4e https://t.co/gPHvtYTssa

We are delighted to announce that Blackheath High School GDST has been recognised as "excellent in all areas" by the Independent Schools Inspectorate (ISI) after their recent inspection in 2022, the highest rating obtainable. Read our report highlights: https://t.co/8nX7NR1zk9 https://t.co/evVI3oeDwZ

On the 26th April, Years 3-7 took part in our Mini Marathon on the beautiful Heath. Thank you to everyone who came to cheer us on, and well done to all the girls who took part! Find out who won each race here: https://t.co/4kF5awZAZl https://t.co/71Xpb1KjnJ

Blackheath High School students are currently preparing for their end of year exams, and have never been revising harder thanks to online tool Seneca Learning! Our girls are the current leaders in Greenwich - you're going to ace those exams, girls! https://t.co/vMY7Wj0HDQ

Our lovely Year 11 girls have been making 'Cards for kindness' - sending positive messages and postcards to residents of local care homes. What a beautiful way to lift someone's spirits! https://t.co/cG9Z70Vd8c

Year 11 have been making 'Little Dresses for Africa' - pillowcase dresses that will be sent to orphanages across the continent. We're sure they will be sew happy with their new dresses! 🧵🪡 https://t.co/iTh6zCLzxn

What are biotic and abiotic factors? We may be scratching our heads, but our Year 11 Triple Science class certainly aren't after their Field Studies trip to Greenwich Park: https://t.co/0ht7Jxpk9O https://t.co/1PqLuR3aWB

We're looking for a Marketing, Events & Communications Officer to join our Marketing and Admissions Team. If you're looking to expand your content creation, campaign management, and event management expertise, visit 👉 https://t.co/MUNNCWrLbn Closing date: 12 May at 12 noon https://t.co/XEd0VZ5juI

Every week the Eco Club surprise us with yet another fantastic achievement! Thanks to them, the Senior School now has a beautiful pond area, even featuring bee, bird, and hedgehog houses for wildlife. Can't wait to see the what you do next, Eco Club! 🦔 https://t.co/AzQnYGLrNP https://t.co/sU5oSq2BVC

As one of their Community Engagement sessions, Year 11 and 12 made a whopping 77 portions of veggie pasta bake for Evelyn Community Store , which is linked with a food bank. Well done girls, you’re pasta-tively amazing! 🍝 https://t.co/UhTvsurAgm

Last week, the @GDST celebrated its first Earth Day as a CarbonNeutral® organisation! This certification has been achieved through reducing our own emissions internally, and supporting four emission reduction projects around the world.

Last term, our German students had the delight of watching German play 'Horoskop' performed for them. Read Laura in Year 10's summary of the show here: https://t.co/eTNscCIiC7 https://t.co/OqMzpkpsu5

Congratulations to Ella Greer, who competed at the Swim England London Regionals in March and did really well! Ella even made two finals in 200 Fly and 50 Backstroke. Fantastic work! 🏊‍♀️ https://t.co/2Vqr6NBfP1 https://t.co/CApPjimqMk

Last Friday was Earth Day, and to celebrate the @GDST announced its new Sustainability mantra: One World, One Future, One Chance. This ethos will see all of the wonderful eco campaigns our girls have initiated united under one strategy. https://t.co/2nRy4Q0lWf

We are thrilled to have a student from @BlackheathSport on the GDST Select Cricket team! Hope an exhilarating time was had by all 🏏 https://t.co/6eNta0XJb8

Pupils from Year 3 to 7 took part in yesterday's mini-marathon on our beautiful Heath. https://t.co/9vG0MuvayE

Blackheath High alumna Yuan Chen has been shortlisted for the WeAreTheCity Rising Star Award! The award recognises women who have made notable contributions within their industry. You can vote for Yuan here: https://t.co/fspUFdOrOI We're rooting for you, Yuan! https://t.co/5kKm4isJUN

Wonderful teamwork from the U13's netball team! Here's to an excellent summer term of sport 🏆 https://t.co/PDKJmNwLub

Massive well done to Julia and Anwita for being shortlisted in the #700STEMChallenge, a competition which sees GDST girls write 700 words on a STEM topic of their choice. https://t.co/XLM8NTZt1z https://t.co/F6wASmJlRy

Have you booked your place for our Sixth Form and Senior School in Action open morning? It's happening tomorrow, so don't miss out! Sign up here to see what makes our school so great: https://t.co/UShxDPslWH https://t.co/5KYdu05uW1

The @GDST are committed to sustainability and the environment, and we're thrilled that findings by the Brookings Institute, have identified girls’ education as one of the best and most cost-effective investments against climate change. Read more: https://t.co/7eQmUn4sZR

Our Sixth Form and Senior School in Action open morning is next week! Book your place to see for yourself why Blackheath High School is a place where girls boldly go: https://t.co/Qsw21KgOMZ https://t.co/gLKdyFZ0Ub

Year 12 Geography class went to Swanage on a field trip to learn about the physical and human geography there (as well as rocking some fabulous tracksuits). See the full article by Zoe, Year 12 here: https://t.co/Rem7TlJQcK https://t.co/r9QnFAEmho

View ALL View All News
October 8

Alexandra is a 26 year old barrister, author and campaigner.

She first came into the public eye when she was mistaken for a defendant three times on the same day in court. She has made it her mission to challenge discrimination in the courtroom. Alexandra has been interviewed on BBC News, ITV news, Good Morning Britain and Women's Hour, and has also been profiled in The New York Times and the Independent.

Alexandra's widely praised debut book “In Black and White: A Young Barrister’s Story of Race and Class in a Broken Justice System”, sets out her journey from Essex to the Bar, and portrays a justice system in which a disproportionately large number of Black people are charged, convicted and sent to prison.

She is also the founder of Black Women In Law, an organisation with over 500 members. She also co-founded One Case At A Time, an organisation which facilitates legal funding and representation in cases of injustice for Black people in the UK. 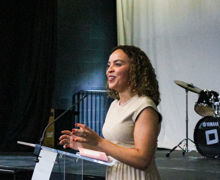 As part of her speech, Alexandra shared her story with our students, telling them about the three tangents of her work: Law, Writing and Activism. She shared humorous anecdotes about her life, as well as the deeply moving story about why she found herself interested in becoming a barrister in her youth.

Our students were engaged throughout the speech, and asked thoughtful questions relating to work/life balances and the impact of religion on being a barrister during the Q&A session at the end.

Needless to say, our students felt very inspired listening to such an accomplished and passionate woman.

We'd like to thank Alexandra for coming along and speaking to our students.