View ALL View All News
August 15

A-Level students at Blackheath High School GDST have achieved a set of brilliant results this year.

Most pleasingly, through their excellent results in a wide variety of subjects, the girls have been free to choose university courses uniquely suited to their passions and talents.

This year we have students leaving us to study everything from Law to Politics, Medicine, World Performance and Aerospace Technology with Pilot Studies to name just a few.

This is testament to the school’s tailored learning path for each student, which is nurtured and inspired by our attentive and dedicated teachers.

The incredible diversity of excellent results was exhibited by our Head Girl Team. The ‘Fab Five’ excelled in a wide range of subject areas and will be pursuing careers unique in nature but alike in ambition.

Among them is US student, Zoe Hadsell, who will be attending Cambridge in September to study English having achieved A A*A in French, English and Maths.

Zoe said: “I’ve wanted to go to Cambridge ever since I was aged 8, so I’m absolutely shell shocked that it’s actually happening. It was my teachers who inspired me to do English and now I’m just so excited to be going!”

Upon finding out that she will be studying Biomedical Sciences with French at Manchester, Freya said: “I’m ecstatic, I really want to be a neuroscientist or research scientist and hopefully help discover a cure for cancer one day.”

Having been inspired to study sciences following her GCSE Astronomy classes at The Royal Observatory with Blackheath High School, Head Girl Hana Khan will be taking a gap year to work and travel in Costa Rica before pursuing a career in Medicine or Natural Sciences.

Rounding out the Fab Five are Monique McIntosh, who earned a well-deserved place at Kent to study Law, and Emmy McLaughlin who will be leaving Blackheath High School to study Liberal Arts in Durham. Both joined the school at the age of three in the nursery.

Other success stories include Hodan Ismail and Christine Mustapha, two Blackheath High School bursary students who will be the first in their families to study Medicine after achieving outstanding results.

Christine, from Blackheath, achieved grades A A B and will be attending Manchester in September. She said: “I wouldn’t have applied for Medicine if it hadn’t been for my teachers who gave me the confidence to do what I wanted and achieve my full potential”.

Hodan, from Tower Hamlets achieved grades of A* A A. She said: “I’m just so pleased all the hard work has paid off!”

Elsewhere, following her brilliant performance of Blackheath High School’s recent production of Rhinoceros at the Edinburgh Festival this month, Lacey Fearon will be attending the University of Essex to study World Performance, while Eve Hurst will be studying Art Foundation at Kingston after gaining an A* in Textiles.

Head at Blackheath High, Mrs Carol Chandler-Thompson said: “At Blackheath High School we pride ourselves on inspiring individuality, so it is fantastic to see today’s results and the range of paths chosen by each of the girls.

“Given this year group’s talent, ambition and dedication to their studies, we are certain that they are going to go on to do great things in the future.

“It’s wonderful to see them rewarded today and I can speak for everyone at the school when I say that we are very proud of every single one of them.”

Ms Day, Head of Futures at Blackheath High School, added “I am thrilled to see the girls go on to do such a variety of pathways. The future really is bright for them.” 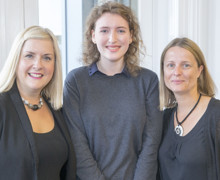 secured a place at Cambridge University. Zoe, a member of the school’s Head Girl Team, will be attending the prestigious university to study English from September having achieved grades A, A*,A in French, English and Maths. Zoe’s journey to Cambridge has been further than most, having joined Blackheath High School in Year 9 after moving from the United States. She said she was inspired by her English teachers at the school, Mrs Chandler and Mrs Beecham, and excelled to such a degree that she will now get to pursue her dream of reading English at one of the world’s best colleges, King’s at Cambridge.

Upon finding out her brilliant results, Zoe said: “I’m happy! Shell shocked! I’ve wanted to go to Cambridge ever since I was 8 years old!”

Hodan Ismail was thrilled to find out that she would be a medical student this Autumn after her hard work was rewarded with tremendous results. Hodan will become the first to study Medicine in her family after achieving grades A*, A, A. In September, Hodan will be leaving her home in Tower Hamlets to study at Cambridge / Imperial College London.

Woolwich’s Freya Cracknell was also in a joyous mood on Results Day having followed up her straight A*’s at GCSE with straight A*’s at A-Level. Freya, a member of the Head Girl team, will be travelling north to study Biomedical Sciences with French at the University of Manchester. Freya also gained an A* in her EPQ qualification which was a dissertation project on ‘How does bilingualism sculpt the brain?’

On hearing her results, Freya said: “I’m ecstatic, I really want to be a neuroscientist or research scientist and hopefully help discover a cure for cancer one day.”

Year 7 learn about the Torah and explore Hebrew script