Everyone was so inspired. Thank you so much again! ⭐️ https://t.co/VCfSZjBZgA

Our Head of Futures, Miss Day, hosts the amazing @isthisesther at today’s inspiring Wollstonecraft Lecture learning all about studying science and careers in healthcare. Thank you @isthisesther 👏👏 https://t.co/z4Ii25WZBC

There's still time to sign-up to our Sixth Form Virtual Open Day on Saturday 26 September, from 12pm, to find out more about our incredible Sixth Form. Registration will close at 12pm on Friday 25 September. https://t.co/cll8qmIf0i https://t.co/0umGPmqMdW

Don't forget to sign-up to our Virtual Open Day on Saturday 26 September, from 9am, to find out all about our amazing school: https://t.co/cll8qmIf0i Registration will close at 12pm on Friday 25 September. We can't wait to give you a warm Blackheath High welcome! https://t.co/Z0dIyYTPBc

We can’t wait for this! Looking forward to hearing all about your amazing work @isthisesther https://t.co/oEStzomJJe

Some of our students starting the week learning Tai Chi as part of our Blackheath High School academic enrichment programme #wheregirlslearnwithoutlimits https://t.co/ecDFUNVL0s

The @BlackheathHigh students are taking full advantage of having the heath on our doorstep in the beautiful weather. #itsgreattobeback https://t.co/jIKlD6yABY

Just over a week to go to our Virtual Open Day! We can't wait to give you a warm Blackheath welcome as we invite you to discover all about life at Blackheath High School. Sign-up here to join us: https://t.co/ajXh2SuVTI https://t.co/poaUdvEXx0

Blackheath High School GDST (@BlackheathHigh) are hosting its first virtual open day on Saturday 26 September, 9AM – 1PM for perspective students aged three to 18. Register and find out more and register below: https://t.co/1I43idOWka https://t.co/Ktp1PMQwWs

All smiles as Year 9 find their beat and try out drumming in today's music lesson 🪘 🎶 https://t.co/nWZRapfNnO

Some beautiful illustrations from our Year 11 students... enjoying taking inspiration on a sunny day 🦋🌸☀️ https://t.co/l2BcwLDzlQ

🎉 OPEN DAY 🎉 @BlackheathHigh will host its first Virtual Open Day on Saturday 26 September between 9am and 1pm. The day will be split into three sessions covering the Nursery and Junior School, Senior School and Sixth Form. Book here 👉 https://t.co/4XVYViCOfb https://t.co/34ozIK9cs5

From studying GCSE Astronomy at the Royal Greenwich Observatory, sports and fitness on Blackheath and taking part in all clubs on offer, find out more about life at Blackheath High School at our Virtual Open Morning. https://t.co/nTlh0p3kgp https://t.co/XMEZZTyT1a

“Continue to be the rule breakers and the change makers” Teacher Sarah Harris with some inspiring words for the future for our very special 2020 valedictory event tonight ✨💫 https://t.co/UchARw1Mu9

Head @cchandlerthomp1 leads the celebrations tonight marking all the successes of our 2020 GCSE and A-level students. Not in the way we’re used to, but a great evening marking all their amazing achievements in what has been a year like no other. Congratulations girls 👏👏👏 https://t.co/PrR7YhkwVp

Getting ready for our special valedictory event ⁦@BlackheathHigh⁩ this evening - I hope the students all really enjoy it They, probably more than any year,deserve a great send off!! https://t.co/FA85xwEkcB

Don't forget to sign up for our Virtual Open Day on Saturday 26 September to find out why we were shortlisted for both @ISParent Best Girls’ School & Prep School of the Year. Register and find out more information here: https://t.co/WxQboUdEDg https://t.co/CcvKO6WiQX

By 8.45 all @BlackheathHigh @GDST Junior girls back in school, staggered starts done. So pleased to have you back! https://t.co/rjxSncapec

So happy to welcome back our girls to school this morning for the first day of term. Have a great day girls! https://t.co/7R74laaqkn

We couldn't be more proud of Leila, Year 4, for showing her creative flair and coming 3rd in the #HenHarrierDay Young Wild Writer Competition! You can read her award-winning story, The City Fox, all about London's hidden wildlife here👇 Congratulations Leila! 👏👏 @HHDayUK https://t.co/xOfR8BOzTd

We can’t wait to welcome our GCSE students into our Sixth Form. Read all about Rafi’s time with us so far, as she looks forward to following her passion for Design Technology in the Sixth Form. https://t.co/yHtRjXKJUj https://t.co/u1OxrItG8Q

From performing at Greenwich Theatre and our fashion show to taking part in cricket tournaments, read all about Roberta’s time at Blackheath High School and what she’s looking forward to in Sixth Form. https://t.co/5lLpDonBH5 https://t.co/h7y6JgwUcq

I want to publicly thank all our hard working @BlackheathHigh teachers who contributed to the work of arriving at this year's results in exceptionally challenging circumstances, and to pass on thanks that parents have expressed today.

Congratulations to all our @BlackheathHigh GCSE candidates: you worked hard and achieved excellent results today. Now it's time to start dreaming about September's fresh start - can't wait to welcome a brilliant cohort into Sixth Form!

View ALL View All News
August 11

A-level results: Blackheath High Students thrive as they step out into the future

We’re incredibly proud of all our Sixth Form students at Blackheath High School who have been awarded their A-levels today, and who have shown incredible resilience, flexibility and determination during challenging and uncertain times.

This year, as our students learned exams would be cancelled and the school closed with learning moving online, we introduced our ‘Excelerate 2020’ programme for our Year 11s and Year 13s. Aiming to turn uncertainty into an opportunity, we offered students a range of courses on life skills including budgeting, negotiation, sustainable living and life hacks for university and cookery courses. As a testament to the character of all our students, they grasped the opportunity to make the most of the situation they found themselves in and learn something new.

Following a year like no other, we are delighted that the majority of our students have confirmed a place at their first choice university.

Carol Chandler-Thompson, Head, said “We are so incredibly proud of what these girls have achieved throughout their time at Blackheath High. No-one could ever have imagined the situation they all found themselves in this year and that exams they’ve worked so hard for would not take place. The resilience, flexibility and positivity they have shown, as well as the support they have given to students across the whole school, has been truly inspiring.

“Our girls have grown through these challenging times and I know more than ever that they will thrive as they embark on the next stage of their journey. We look forward to hearing all about it and welcoming them back to the school soon, as they will always remain part of the Blackheath High family”.

Blackheath High Senior School Prefect, Natasha, was among those delighted to receive her results and confirm her place at the University of Edinburgh to study French and Spanish. 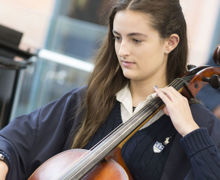 atasha set her heart on studying at Edinburgh after falling in love with the city while performing with the school at the Edinburgh Fringe Festival. A talented musician who has been part of the Blackheath High School family since she was three years old, Natasha received a Music Scholarship when joining Year 7 and has since been involved in a broad range of music performances and drama productions throughout her school life. From learning to play piano and cello to performing in Sinfonia, the school orchestra, taking part in drama productions and drama GCSE to of course the “enormous highlight” of her time at Blackheath High of performing with the school at the Edinburgh Fringe Festival.

Natasha has also taken every opportunity to explore her interest in a future career in law. In Sixth Form, Natasha set-up the Law, Economics and Business Society and for her EPQ sought to answer the question, “How has ancient Roman law influenced current English law?”. It was after hearing High Court Judge Martin Chamberlain speak at a Blackheath High School Wollstonecraft Speaker Series event that she says “I left the lecture feeling not only inspired, but confident that a legal career was where I could see myself”.

After completing her degree, Natasha hopes to study a law conversion course and flex her language skills by specialising in EU and international law.

Dorcas was thrilled to find out she will be studying Business at Goldsmith’s University this Autumn, having been awarded great results in Textiles, Spanish, Business and the EPQ qualification. 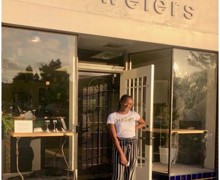 and Textiles departments, where her passions lie. Since joining, Dorcas has taken every opportunity to explore her passions for fashion and jewellery and gain experience and understanding for a future career. For her EPQ, Dorcas researched current ethical issues in the jewellery industry and represented those ideas physically in a jewellery piece. She also took a leading role in both of Blackheath’s showstopping annual fashion show, saying, “it was an extremely unique experience from garment preparation to rehearsals, we had complete creative freedom throughout”. Dorcas emphasised that the hands-on experience helped her learn the importance of time management and communication.

Dorcas describes the career support she received at Blackheath High School as “really immaculate”. In Year 12, she was supported by Head of Futures, Cath Day, to secure an “amazing” fully-funded work experience placement in San Francisco in an ethical jewellery business. The experience gave Dorcas an unrivalled and unforgettable insight into practical jewellery knowledge, as well as an understanding for funding for entrepreneurship, including practical knowledge such as putting together financial projections to pricing jewellery to ensure profit. She also had the opportunity to meet other jewellers in the San Francisco and Oakland community and says she discovered “a side of business that isn’t competitive, but a values collaboration”.

Beyond her love for jewellery and textiles, her time at Blackheath saw Dorcas take-up netball for the first time in Year 12 and says she also really enjoyed studying Russian and Italian as part of the GDST Limitless Learning Excelerate Programme, which allowed her to dive deeper in her love for languages, at her own pace.

Dorcas’s choice to study at Goldsmiths was partly inspired by fellow pioneer and Blackheath High School alumna, Mary Quant, who also went on to study at Goldsmiths. After graduating, Dorcas hopes to further follow in her creative footsteps and set-up her own jewellery and fashion business.